Some Questions and Answers About the Columbus Myth 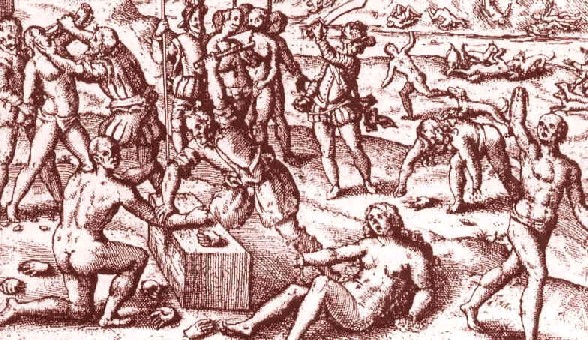 Why do you call it the Columbus 'myth' rather than story or history? A myth is a story which, though it may contain elements of truth, is primarily fictitious. The story of Columbus as it is taught in the U.S. is a myth.

So, even if that's true, what's the harm? Some myths are used to justify atrocities committed by one people against another. The myth that Jews carried disease was spread through Nazi Germany to justify genocide there. The Columbus myth in part perpetuates the justification of the past genocide of Native Americans.

But Columbus was brave to do what he did, and he proved the world was round, right? Wrong. Europeans at that time agreed that the world was round, but there was debate about its size. The majority (and correct) opinion held that the world's circumference at the equator was about 20,000 miles; Columbus held a mistaken minority view that it was much smaller. But Columbus did not launch his flotilla for purposes of discovery, but rather for economic trade. His venture was foolhardy, for if he hadn't had the good fortune to land in the previously unknown New World, he would have been lost at sea or forced to turn back for lack of provisions.

But he did discover America. How does one 'discover' a land already populated by millions of people? Besides, Vikings settled in North America centuries before the Spaniards. And Columbus never set foot on mainland America, nor was he aware of its existence; he landed in the Caribbean, and his explorations were limited to Caribbean islands. Despite clear evidence to the contrary, he insisted to his dying day that he had reached Asia.

But how can you blame Columbus for his actions, when he was only carrying out policies and practices which were normal for his time? Spain was not a slave-trading country until Columbus, desperate to prove the value of his voyage, hauled away Native Americans to be sold as slaves in Seville. (Queen Isabella initially was infuriated, and had the Indians returned, but later acquiesced to this practice). Columbus initiated the practice of chopping off the hands of adults who failed to provide a certain amount of gold each month (as depicted in the plate by Bartolomé de las Casas at the top of this page). He also initiated slave operations that worked entire tribes of people to death.

So you don't think we should celebrate Columbus Day? No, I think it is a grave insult to non-European Americans and a disgusting tribute to a character totally undeserving of such heroic celebration. The Columbus Myth is a re-writing of history as nationalistic propaganda.

Isn't that a bit of a 'PC' ('Politically Correct') attitude to take that we should be so overly sensitive to minority demands? No. 'PC' is a term used by folks who enjoy the privileges of the status quo, and don't care to debate the facts. I'd rather that someone consider the facts that I've presented, rather than simply defame me with a label.

For a more entertaining take on the Columbus myth, check out this comic at The Oatmeal.